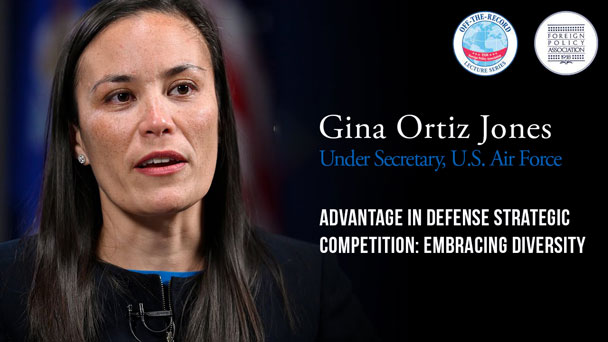 Event offered by:
Off the Record
Foreign Policy Association

Please join Off the Record and the Foreign Policy Association as we welcome Secretary Gina Ortiz Jones, the United States Under Secretary for the Air Force. This hybrid event will have an in-person component hosted at the New York City Bar Association (42 West 44th Street) as well as virtual attendance via Zoom. You can register for the in-person event via eventbrite: https://www.eventbrite.com/e/how-the-us-air-and-space-force-embrace-diverse-talent-tech-tickets-299440593877

Or you can regsiter for the event virtually via Zoom by following this link: https://us02web.zoom.us/webinar/register/WN_ZO4xMPWHRQO1pfIRwN9AYA