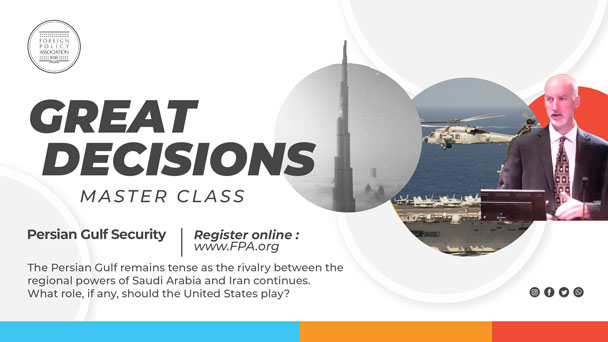 Since 1918 the Foreign Policy Association has served as a catalyst for open, objective and non-partisan public discourse of world affairs and American foreign policy. Great Decisions is an annual series that examines the most pressing foreign policy challenges each year. During this global pandemic, we will be offering an online master class for those who are unable to participate in their usual discussion groups in-person.

This second class in the series looks at the Persian Gulf. The Persian Gulf remains tense as the rivalry between the regional powers of Saudi Arabia and Iran continues. Tensions escalated in early 2020 as the United States began to intervene in the Gulf, launching an airstrike that killed two Iranian military commanders. What are the historical influences that have led to these tensions? What role, if any, should the United States play? Is using military force a viable foreign policy option for 2021 and beyond?