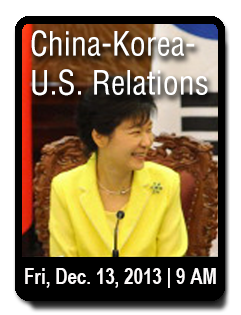 Event offered by:
The Korea Society

Korea’s President and her advisors speak of hope for enhanced trilateral relations among Korea, the United States and China. 2013’s historic summits between Obama and Park, Obama and Xi, and Park and Xi revealed a growing complementarity of positions vis-a-vis North Korea and common calls for denuclearization. How does Korea navigate space among its great ally and great neighbor, balancing political-security and economic realities? How do domestic political determinants influence foreign policy in this area for all three actors? How do China and U.S. strategists regard cooperation on near-term challenges, such as North Korean nuclear and missile development, as well as the mid to long-term realities of integration and unification? Join a special session featuring key analysts, including Pacific Forum CSIS President Ralph Cossa, Fudan University’s Shen Dingli,  Yonsei University’s Han Sukhee and John Delury, CFR’s Scott Snyder, and the Fletcher School’ s Sung-Yoon Lee, in a dialogue hosted by The Korea Society Senior Vice President Stephen Noerper.
$20 Students, $35 Members, $55 Non-members
8:30 AM | Registration
9:00 AM- 12:00 PM | Discussion
ABOUT THE SPEAKERS
Ralph Cossa is president of the Pacific Forum CSIS in Honolulu, Hawaii. He is also senior editor of the Forum’s quarterly electronic journal, Comparative Connections. Mr. Cossa is a board member of the Council on U.S.-Korean Security Studies and the National Committee on U.S.-China Relations. He is also a member of the International Institute for Strategic Studies and the ASEAN Regional Forum Experts and Eminent Persons Group, as well as a founding member of the Steering Committee of the multinational Council for Security Cooperation in the Asia Pacific (CSCAP). He is a political/military affairs and national security specialist with more than 30 years of experience in formulating, articulating, and implementing U.S. security policy in the Asia-Pacific and Near East–South Asia regions. He writes a regular column for the Japan Times and Korea Times and is a frequent contributor to the International Herald Tribune and other regional newspapers and periodicals. Mr. Cossa served in the U.S. Air Force from 1966 to 1993, achieving the rank of colonel and last serving as special assistant to the commander in chief of the U.S. Pacific Command. He previously served as deputy director for strategic studies at the National Defense University’s Institute for National Strategic Studies and earlier as a national security affairs fellow at the Hoover Institution at Stanford University. Mr. Cossa holds a B.A. in international relations from Syracuse University, an M.B.A. from Pepperdine University, and an M.S. in strategic studies from the Defense Intelligence College.

Shen Dingli is a physicist by training and is a professor of international relations at Fudan University. He is also the founder and director of China's first non-government-based Program on Arms Control and Regional Security at Fudan University. Dr. Shen teaches at Fudan University graduate coursesNonproliferation and International Security, Science/Technology and National Security, as well as doctoral courses.  He co-teaches undergraduate courses, China and the World, and Contemporary America at Fudan.  His research areas cover China-U.S. security relationship, nuclear arms control and disarmament, nuclear weapons policy of the United States and China, regional nonproliferation issues concerning South Asia, Northeast Asia and Middle East, test ban, missile defense, export control, as well as China’s foreign and defense policies.  He has co-edited China’s Development Report, China and South Asian Relations in the 1990s, Conservatism and American Foreign Policy, Realism and U.S. Foreign Policy and published over 500 articles and papers, 1/2 of which abroad in a dozen foreign languages.  In addition, he has published over 20 papers in physics in China and abroad. Dr. Shen received his Ph.D. in physics in 1989 from Fudan University and did his post-doc in arms control at Princeton University from 1989-1991.  In 1997, he was awarded an Eisenhower Fellowship.  From 1997-2000, he served as Fudan University’s Director of Office of International Programs and Deputy Director of Office of Development and Research.

Han Sukhee is an Assistant Professor of Chinese Studies in the Graduate School of International Studies at Yonsei University and Director of Center for China Studies of the East Asia Institute. Professor Han received both his B.A. and M.A. in political science and diplomacy from Yonsei University and received his M.A. and Ph.D. from Fletcher School of Law and Diplomacy, Tufts University. He served as a visiting fellow at Institute of Asia-Pacific Studies of Chinese Academy of Social Science, China and teaching professor of School of Government at Peking University. His recent English publications include Public Diplomacy between China and the World: The 2008 Beijing Olympic Torch Relay, A Test Case (2009), From Engagement to Hedging: South Korea’s New China Policy (2008), Alliance Fatigue amid Asymmetrical Interdependence: Sino-North Korean Relations in Flux (2004).

John Delury is an assistant professor of International Studies at Yonsei University in South Korea. Prior to joining Yonsei he was Associate Director of Asia Society’s Center on U.S.-China Relations, where he also serves as Director of the China Boom Project and Director of the North Korea Inside Out Task Force. He taught Chinese history and politics as visiting assistant professor in the history department at Brown University, and taught political theory at Peking University in 2006, after a year of graduate studies in Beijing. He is a recipient of the National Committee on American Foreign Policy's 21st Century Leader Award. John’s writings on Chinese politics and economics, Sino-US relations, and North Korean issues have appeared in Far Eastern Economic Review, Huffington Post, Policy Review, Project Syndicate, Journal of Asian Studies, and World Policy Journal. He frequently appears as a media commentator, including recent appearances on Fox News, BBC, Al Jazeera and CBS Radio. John received his B.A. and Ph.D. in History from Yale University, where he wrote a prize-winning dissertation on the political reform ideas of 17th century Chinese scholar Gu Yanwu. He reads classical Chinese, speaks Mandarin and French, and has rudimentary Japanese and Korean.

Scott Snyder is senior fellow for Korea studies and director of the program on U.S.-Korea policy at the Council on Foreign Relations (CFR), where he had served as an adjunct fellow from 2008 to 2011. Snyder's program examines South Korea's efforts to contribute on the international stage; its potential influence and contributions as a middle power in East Asia; and the peninsular, regional, and global implications of North Korean instability. Snyder is also the co-editor of North Korea in Transition: Politics, Economy, and Society(Rowman and Littlefield, October 2012), and the editor of Global Korea: South Korea's Contributions to International Security (Council on Foreign Relations, October 2012) and The U.S.-South Korea Alliance: Meeting New Security Challenges (Lynne Rienner Publishers, March 2012). Prior to joining CFR, Snyder was a senior associate in the international relations program of The Asia Foundation, where he founded and directed the Center for U.S.-Korea Policy and served as The Asia Foundation's representative in Korea (2000-2004). He was also a senior associate at Pacific Forum CSIS. Mr. Snyder has worked as an Asia specialist in the research and studies program of the U.S. Institute of Peace and as acting director of Asia Society's contemporary affairs program. He was a Pantech visiting fellow at Stanford University's Shorenstein Asia-Pacific Research Center during 2005-06, and received an Abe fellowship, administered by the Social Sciences Research Council, in 1998-99. Snyder received a BA from Rice University and an MA from the regional studies East Asia program at Harvard University and was a Thomas G. Watson fellow at Yonsei University in South Korea.